(0)
You have no items in your shopping cart.
Menu
Search
Wishlist
(0)
Filters
Personal menu
Looking to Gain Web Traffic as an Event Rental Company? NES at the Alberta Foodservice Expo (Part 2) 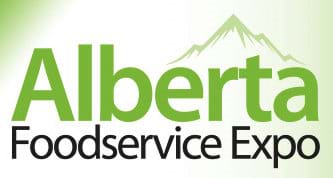 The NES Trade Show team was off to Edmonton Saturday, where they linked up with Dale, Will, and Kevin of our Alberta-based sales team to set up for the 2012 Alberta Foodservice Expo. Once we got everything onto the show floor, we managed to get the booth set up in about four hours and make sure that everything would be ready to go for the Sunday Morning start. After finishing up the set-up, I headed out into Edmonton to explore and to get a bite to eat.

While I was walking down 118th Avenue, I came across the Kaleido Family Arts Festival. This weekend-long festival features music, dance, theatre, film, literary and visual arts all in a four block stretch of 118th Avenue between 90th and 94th Streets. There were musicians playing, and numerous street vendors showing and selling their hand-made sculptures, paintings, and other unique pieces. Lots of families with young children were having a good time and there was just a great vibe in the air. It certainly didn’t hurt that the evening weather was also fantastic. 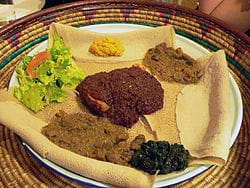 I continued along 118th Avenue to the corner of 95th Street and decided to have dinner at Habesha Ethiopian & Eritrean Cuisine for some authentic Ethiopian and Eritrean food. This was the first time I had ever had Ethiopian or Eritrean cuisine and it was quite the adventure. Not really knowing what to order, I decided to ask the waiter what he would recommend. He brought me a sampling of menu items which consisted of a variety of meats (some spicy, some not), specially seasoned potatoes, and a mixed vegetable/salad on a large platter that was covered with pita-like flatbread called Injera. The meats and potatoes were in small fruit nappy bowls (each about 5 ½ ounces) while the mixed vegetable salad was piled onto the middle of the Injera. The waiter then said dig in. It didn’t take me to long to figure out that this meant I was to eat everything with my hands and use the Injera to scoop up the food. After watching my neighbour at the next table, I quickly dumped all my bowls of meat and potatoes onto the Injera bread and salad and began to dig in.

I found my dinner experience most enjoyable and would highly recommend anyone who has a little adventure in their spirit to go for what I found to be one of my most unique and enjoyable dinners of the past summer. I would also agree with the 4 ½ out of 5 rating that Trip Advisor gives this restaurant. I should add that if you have trouble with smoke, you may find it difficult to stay in the restaurant. During my time many of the patrons were smoking from Hookah’s and many other patrons were waiting for a Hookah to come available.