(0)
You have no items in your shopping cart.
Menu
Search
Wishlist
(0)
Filters
Personal menu
5 Problems with Plastic Folding Tables Which style of Chiavari chair cushion is Best?

The last time we looked in on our long-term table test, our 4-foot NES Rectangular Plastic Folding Table was going strong while the top layer of our 4-foot NES Rectangular Wood Folding Table was starting to peel badly. Now that summer is over, we thought it would be a good time to look in on our table test and see what August’s heat and humidity has done to both of the tables. We were really curious to find out if the peeling had progressed on the wood folding table, and whether the weather was starting to deteriorate the plastic table. So after almost 90 days, how are the tables holding up? 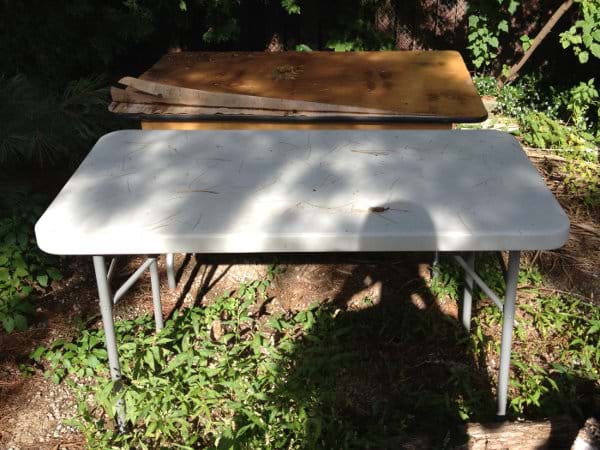 As you can see from the picture, the layers of the plywood have continued to separate with the top layer curling and the layer below starting to buckle and form waves. The tabletop continues to discolour from exposure to the elements. However, while the wood deteriorates, the metal hardware on the table has not begun to rust and the powder-coated table legs are still in pretty good condition.

The plastic table is still showing no ill effects from its time out in the elements. One would merely need to wipe the table off and it would be suitable for use at an event. Again, the metal hardware on the table has not taken any damage from the moisture in the air, or the rain storms that we have had.

After the last check in on the tables, I was wondering if we would see more peeling on the top layer of plywood or if it would completely separate as the glue holding the layer together weakens. The top layer has continued to separate, but it is still firmly attached to the table. The buckling of the second layer sort of surprises me. I didn’t expect that we would see deterioration of an inner layer simply because it is somewhat protected by the top layer of plywood.

I’m not surprised by the lack of deterioration of the plastic table-top. I was sure that if anything was going to survive a test of the elements, it was going to be thee plastic top. I am very happy that they metal table-legs on both tables are coming through this test in with flying colours. It will be interesting to see what happens to them as the temperature decreases this fall, and what effect snow will have on the tables.