(0)
You have no items in your shopping cart.
Menu
Search
Wishlist
(0)
Filters
Personal menu
NES at the Alberta Foodservice Expo (Part 2) Inspect for Damage Before Accepting

Early September typically means the end of summer and cooler weather, but we had a gorgeous day at the CRA Ontario Golf Tournament at the Hawkridge Golf Club in Orillia. This was the first year that the Hawkridge Golf Club held the event, and they did an incredible job hosting the CRA. As with previous year's tournaments, it was a shotgun 'bestball' tournament with members and suppliers teeing off from every hole on the course at 11:00am.

Bill Winslade and I represented National Event Supply at this year’s event as Dennis was in Alberta visiting customers after exhibiting in the Alberta Foodservice Expo. This year the National Event Supply team played with Brian from Texada Software, another rental industry supplier. Texada Software provides rental companies with a full software solution that can be hosted internally or licensed as Software as a Service. Since we played as a threesome we had the luxury of having an “extra” shot to share between the three of us. However, Brian is such a good golfer that we found we only used the extra shot about 50% of the time. Unlike last year (and thanks in most part to Brian) our score was a very competitive 8 under par. Among the many highlights during the day was Bill almost sinking a 50ft putt, and Brian getting lucky by having his ball pop out of the sand trap and onto the green. 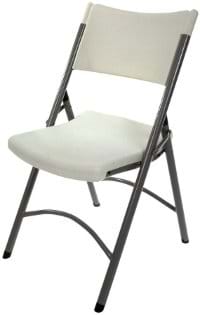 It was a great turn out this year with almost 80 people attending. After golf everyone enjoyed a fantastic roast beef dinner, dessert, and some libations. The day was wrapped up with short presentations from a few board members followed by some golf awards and the raffle. The awards included prizes for the longest drive, closest to the pin, closest to the target (which was an NES Reliable Blow-Mold Folding Chair), some fun prizes, and the tournament winners. This year, as with previous years, the winner of the tournament was decided by the best poker hand instead of by the best golf score. This method helps to keep it light and enjoyable for golfers of all skill levels. After the awards were given out, the raffle prizes began. This year’s raffle prizes included a barbeque and pressure washer both donated by CRA Members.

We would like to thank the CRA Ontario Members that worked hard to organize this great event. We hope to see you all out on the course for next year’s event!