(0)
You have no items in your shopping cart.
Menu
Search
Wishlist
(0)
Filters
Personal menu
How much storage space do I need for 200 Chiavari chairs? Where to Buy Glass Racks in Canada

Who Owns The Recipe: The Chef or The Restaurant? 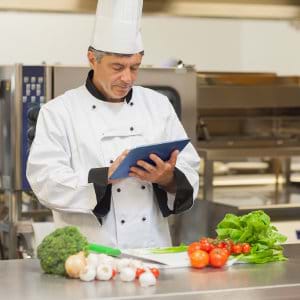 An interesting discussion popped up on the internet recently about the ownership of recipes. Most often in restaurants, the head chef is tasked to create the recipes for the menu. The question raised in the discussion was: when a chef creates a recipe at a restaurant, who does it belong to? Who has the rights to it?

In the business world, a software engineer is paid by their company to create something that belongs to the company since the person was paid to produce it. So what does it mean in the restaurant world?

If we look at copyright laws, the courts have ruled that in general recipes cannot be protected by copyright law. The courts have ruled that “the identification of ingredients necessary for the preparation of each dish is a statement of facts.” And also that the directions were not protected by copyright because copyrights do not extend to procedures, processes or systems (source: Paleo Magazine). What can be copyrighted though is any descriptive text associated with the recipe, including illustration or pictures (Source: US Copyright Office), which is how cookbooks can be produced using recipes that have been altered from other chefs.

Therefore, in terms of the law, a chef has no rights to copyright a recipe – but neither does the restaurant. The best advice I’m able to find that protects both the restaurant and the chef is to build in non-disclosure agreements and non-compete agreements into employment contracts. This ensures that both parties have an understanding of what they can and can’t do – such as if a chef leaves a restaurant perhaps it’s built into the non-compete that his/her signature dishes are taken off the menu – or it’s built into the non-compete that a restaurant gets to keep a chef’s signature dishes and the chef cannot take the recipe with him/her. Another thing for all to consider, it’s not the recipe that makes the food so brilliantly, it’s the chef. So while a recipe may stay at a former restaurant, the chef has every opportunity to create something equally brilliant if not more so. And if a recipe leaves with the chef the new executive chef at the restaurant will create something equally brilliant if not more so to replace the former recipe.

What do you think? Does a chef own the recipe or the restaurant? Let us know by tweeting us @NatlEventSupply, post on our timeline on Facebook, our page on LinkedIn or Google+.