(0)
You have no items in your shopping cart.
Menu
Search
Wishlist
(0)
Filters
Personal menu
10 Qualities to look for when recruiting an Event Planner for your Team New in Stock: 6ft Fitted Table Covers

Unless you’ve been living in a hobbit hole, it’s probably fair to assume as a chef or foodservice operator, you know who Gordon Ramsay is. Famous Chef, Father, Actor, Entrepreneur, Triathlete, and the list goes on, Chef Ramsay has lived the inspiring story of coming from humble roots and working his arse off to succeed in the culinary, business and entertainment worlds. This past January, Chef Ramsay went on Reddit to do an Ask Me Anything interview. As a company that provides restaurant supplies to foodservice operators and chefs, reading Chef Ramsay’s refreshingly open, honest, down to earth and likeable interview only made us love the celebrity chef even more. Like this gem of a quote which gives us pause for thought…“Someone said to me last night ‘Never trust a skinny chef.’ And I said ‘That's bullshit, never trust a fat chef.’ And she said ‘Why?’ And I said ‘Because they've eaten all the good bits.’”

1. He stresses the importance of understanding Michelin Stars are awarded to Restaurant’s, not Chefs. 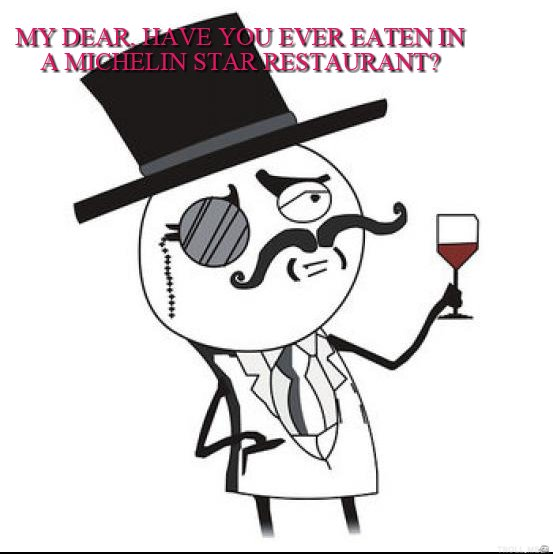 “So the stars are awarded to the restaurant. And sometimes the chefs think the stars belong to the chefs, but they belong to the restaurant. The service is just as important. Michelin's had a hard time in America, because it was late coming to the table. But if there's one thing I respect, it's consistency. They manage to identify consistently, and it's all there for the customer.”

2. He also pointed out that you can’t charm your way to a Michelin Star 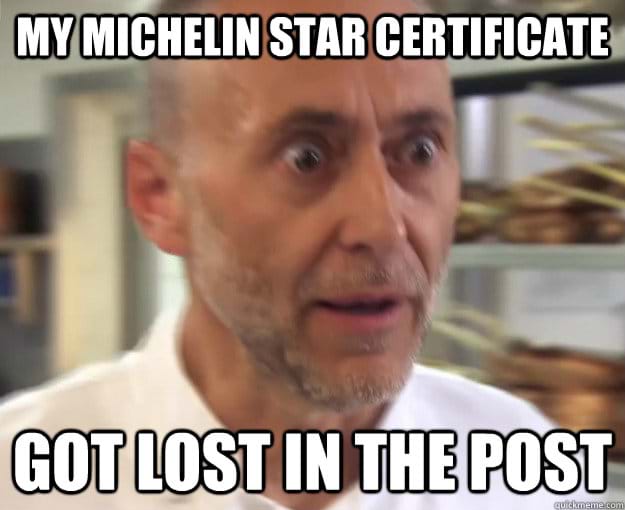 “…you know, if there's one thing I've come to admire with the Michelin is that it's consistent. It's a guy who is judging you incognito. We have a lot of guys in this country, and Europe, who are a bit too familiar, too chummy with chefs, and they overindulge - food editors, they'll know, and tip off the chef. With a Michelin guide, you have no idea when they'll be in, or when they'll review you. And that's why they're the most feared and respected by chefs.”

3. Pork Chops with Rhubarb should be a strange food combination but really “Shit! It’s delicious!” 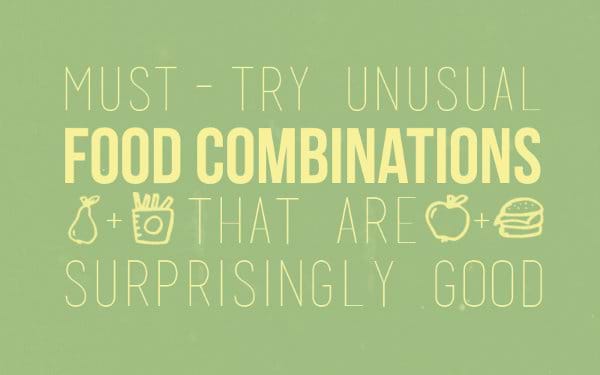 “I had an amazing doubled pork chop with rhubarb. Now rhubarb is something we literally eat with desserts, but this dish was incredible. It was in Spain. It was a double pork-chop that had been slow-roasted over an open pit fire with rhubarb. Absolutely delicious. This was one of my mates that was trying to show off cooking in his back garden in Spain when we were out filming for KITCHEN NIGHTMARES. I didn't think it was going to work, to be honest.

And then when I started tasting, I thought Shit! This is delicious!”

4. His witty insults surprise even himself sometimes 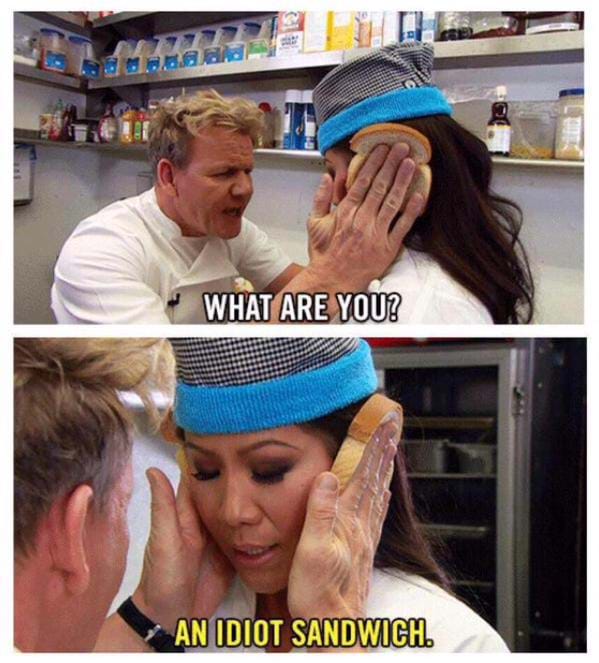 “Heh! Witty insults? Ehm... it just happens sort of spur-of-the-moment. I see red, I get frustrated, I let it go. I'm not very good at editing myself. I have to get things off my chest. If there's one thing my mum taught me, it's speak your mind, be firm, get things off your chest. I think it's a good way to work, and quite healthy to have that attitude. Do I think about it previously? No, they just come to me in a flashpoint. And sometimes even I sit back and think Did I just say that?”

5. He manages his time by multi-tasking very well and never staying too long in one place 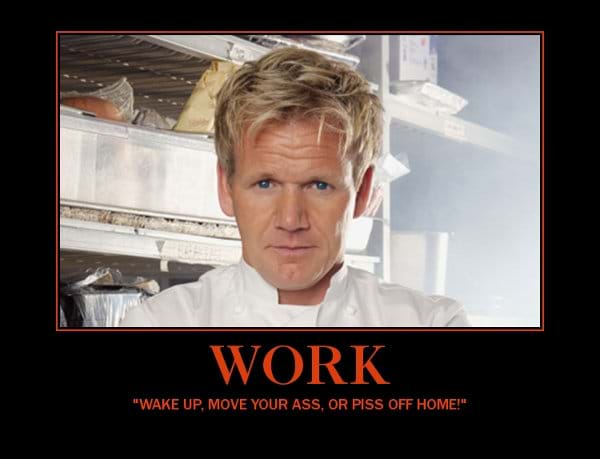 And I am never in one place too long.

I think now with, you know, my own production company, I'm very lucky the schedule works around my diary. I work my ass off - you know, 15, 16 hours a day. I quite enjoy the time difference when I finish, for instance, last night we were taping MASTER CHEF until 9 or 10 PM at night, I'll have a quick bite to eat, and then I'll call the UK at midnight - because come midnight LA time, West Coast time, it's 8 o'clock in the morning. I'll say good morning to the kids, I'll catch up with my business in London, and then from 2-5 o'clock, I sleep, get up, go to the gym, and then start my day again.

So that's my daily slog.

So I stand by my convictions - when I opened up the restaurant, Gordon Ramsay, back in September 1998, I decided I was going to work my ass off. My flagship restaurant in Chelsea has never been open on a Saturday and Sunday - it's never been open on a week-end, because I thought if we're going to do this, I'd like to do this properly, so my staff needs time off. So I work hard, but I give myself time off on the week-end. I cut it off, and power down for 48 hours.”

6. His favourite Disney movie is predictably adorable while plugging a new video we had no idea about!

It has to be RATATOUILLE.

I was very close, last year, when we had Bradley Cooper in the kitchen cooking up a storm for his new ADAM JONES movie coming up the end of this year, and understand his level of excitement about service, being on the line - he didn't want to tiptoe, he wanted to be in there, from first light to the last plate leaving the kitchen, and it was so nice to see how he respected the team. He didn't want pampering, he wanted to roll his sleeves up and dive in there.

He said "Gordon, I just want you to teach me to put food on a plate, because it's really magical how you put food on the plate the way you do."

So I'm very excited for this movie, coming out, called ADAM JONES. It's very exciting to see an actor understand what you do, and knowing that he can't learn how to cook in a few months, but absolutely nailing it when it came to the level of presentation.”

7. He offers a different take on the traditional advice for new or aspiring chefs

“Ehm, good question. The biggest piece of advice - you know, cooking is about character. It's about different cuisines. And I think sometimes we go into it a little bit blinkered-vision. Learn a second vision - I thought I really knew how to cook when I worked for Marco and then when I went to France, it really opened my eyes. So learn a second language, and travel. It's really important to travel. That is fundamental. because you pick up so many different techniques, and learning a second language gives you so much more confidence in the kitchen.”

You can read the whole AMA here.

What was your favourite part of the AMA? We’re all ears! Tweet us @NatlEventSupply, post on our timeline on Facebook, our page on LinkedIn or Google.